It was just another of those interminable balls thrown by the close friends of the Landgraf, the Graf Nicklaus and Grafin Nora von Spanielberg. Most of the guests had arrived already, and Landgraf Bogey was just about to walk away from the receiving line when the majordomo made another announcement.
“The Countess Jodylynn von Kolich-Hrvatska, and her escort, Major Edwina!”
Bogey stepped back between Nora and the Landgrafin. Looking at his wife, he asked, “Slim, is this the one you you have been wishing to meet?”
“His Excellency forgets He is in public!” Landgrafin Lauren snapped at the use of the nickname she disliked, just as Nora, having accepted the curtsy of her guest, turned to Bogey.
“Your Excellency, Countess Jodylynn von Kolich—err…”
A vision of blonde hair above a brilliant and amused white smile were quickly lost as the Landgraf’s attention was drawn to an imposing valley of décolleté. The smile never faltered as she said in a strange, Eastern accent, “von Kolich-Hrvatska, Your Excellency.”
“I am pleased to meet you, Countess,” Bogey said as he kissed the proffered hand and remembered just in time to look the newcomer in the eye. As he did so, he felt the Landgrafin’s heel dig into his foot.
“And may I present Landgrafin Lauren to you, Countess?”
Never losing her smile, the countess turned to the Landgrafin. A quick narrowing of eyes informed the countess that her beauty and figure did not impress Bogey’s wife.
“Charmed, Countess. What brings you to our modest little country? I’m sure the glittering capitals of Europe are more to your…bent.”
A quick curtsy, just deep enough and no more, and the countess replied, “Thank you, Your Grace. I am afraid that I have fled my small estate in Kentukevania. I was hoping that—.”
Just what the countess was hoping was interrupted by a great shout from Graf Spanielberg. “By Jove, Major! You’re a WOMAN!”

Silence descended in the hall as every eye turned to look at the entrance. Standing in a rich brown coat with coral smallclothes and facings at cuff and collar, the officer next to the countess was now seen to be just that:  a tall, athletic woman wearing a military uniform.

Nora, never at a loss, spoke quickly. “Major, welcome to Schloss Spanielberg. Have you met our Landgraf?”
As bows were exchanged, the countess completed her sentence. “I was hoping, Your Excellency, that you would honor me by allowing my escort and her legion to join with your army. You will find them to be, shall we say, an exceptional BODY of troops?”
The countess and major walked into the now buzzing hall. Nick cleared his throat. Nora, searching for something to add, quickly commented, “The countess was wearing such exquisite earrings, do you not think so Lauren?”

Nick answered, “Yes, most impressive.”
Nora rolled her eyes. “Dear, the earrings were higher up than you were looking.” 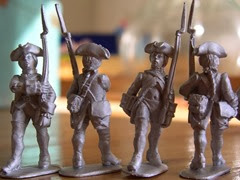 Absolutely *GREAT to have you back among us! Specially to present such... fascinating unit, if I may.

Actually, those figures at the bottom ARE the Eureka infantry and artillery. I'm in the process of ordering from Eureka.

I know what you mean...I wouldn't relive 2013 if I had the option. Looking forward to all your future posts!

Welcome back - and, as Jean-Louis says, a fascinating unit. Looking forward to seeing them completed.

Oops! Duly noted and I will make sure to give credit where it is due.

:-) Sorry, no criticism intended - it really was just good to see one of the templates in use again! But credit is always pleasing too...

I'm looking forward to seeing the Sandras painted. I knew that they would grab Jean Louis' attention. :)

If you want a preview, the unbased figures were on TMP at the end of February:

Napoleon: A Life by Andrew Roberts

The Armies of My ImagiNations

Ed
Retired US Air Force officer, now working as a civilian for the USAF. I've been wargaming with miniatures since 1983.